FoBAH members were invited to be guinea pigs for a ‘Un-tour’ of the Roundhouse, and several of us attended, during one of the wetter weeks in June, to play detective around the building to discover its history and to chat about how best the team at the Roundhouse (from the National Trust and the Canal and Waterways Trust) could make cultural heritage work with different groups. Our main guide was Kurly McGeachie, a Birmingham Poet. 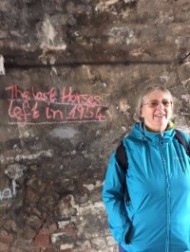 We were asked to use our imagination to guess the various uses of the unusually shaped building, designed in a competition, which had included bringing in by canal Rowley Stone for road building and later coal. We toured some parts of the building, guessing at the forge and where the horses of the Public Works Committee were kept. Tiny artefacts in one of the upstairs rooms gave away its former use by the Gas Lighting Department and we heard a convincing ghost story by the first floor loading door.

It was not a conventional tour but more interesting for that and the poems Kurly entertained us with throughout – and I’ve never received a poem after a visit before!